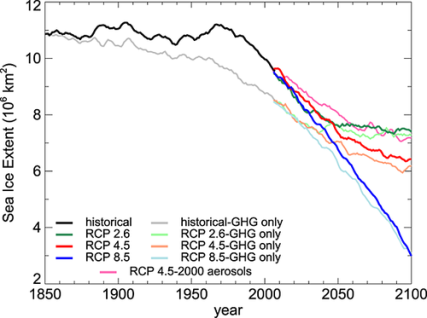 I continue studying the latest peer reviewed scientific studies on when we can expect the first Arctic Blue Ocean Event in September, and when adjacent months will become ice free. This video and the next are most important, must watch videos that converge to what I have been saying for many years. Here’s the bottom line; just the facts ma’am.

In previous videos I’ve discussed and estimated the global temperature rise from a reduction of worldwide aerosols due to global industrial slowdowns with our attempts to contain the Coronavirus.

I ask whether there is a large influence from aerosol reductions in the Arctic, and examine two recent peer reviewed scientific papers that look at aerosol/sea ice connections.

Here, and in my last video I ask whether there is a large aerosol reduction influence on rising Arctic temperatures, and thus on rapid Arctic sea ice melt losses.

Ref:  [1] ‘Globally, sulphur dioxide emissions, which lead to the formation of sulphate aerosols, peaked in the 1970s and have since declined by ∼15%. Correspondingly, there was a sharp increase in the burden of sulphate between 1950 and 1970; and since 1980, the burden has dropped. In contrast, black carbon emissions have increased throughout the twentieth century with a greater rate of increase between 1970 and 1990; the simulated global atmospheric burden of black carbon almost doubled during that time frame, but there is an indication of a decrease over the last decade‘. 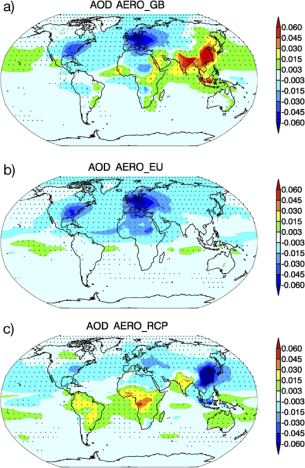 [2] ‘Observations show that the Arctic sea ice cover has been shrinking at an unprecedented rate since the 1970s. Even though the accumulation of greenhouse gases in the atmosphere has been closely linked with the loss of Arctic sea ice, the role of atmospheric aerosols in past and future Arctic climate change remains elusive. Using a state-of-the-art fully coupled climate model, the authors assess the equilibrium responses of the Arctic sea ice to the different aerosol emission scenarios and investigate the pathways by which aerosols impose their influence in the Arctic.

‘These sensitivity experiments show that the impacts of aerosol perturbations on the pace of sea ice melt effectively modulate the ocean circulation and atmospheric feedbacks. Because of the contrasting evolutions of particulate pollution in the developed and developing countries since the 1970s, the opposite aerosol forcings from different midlatitude regions are nearly canceled out in the Arctic during the boreal summer, resulting in a muted aerosol effect on the recent sea ice changes.’

Earth just had its warmest May on record, according to four separate analyses, and there's an increasing chance 2020 may be the planet's warmest year. https://t.co/M1vV5rwC2a pic.twitter.com/COiC1BetdB

Please consider donating to support my work.  I put a lot of time and effort into researching, studying and producing my videos so that you can learn how quickly our world is changing.  Donating does not need a PayPal account, but simply a credit card. Please click here.

Just in: @BerkeleyEarth confirms that last month was the hottest May in recorded history globally.

We are in a climate emergency. pic.twitter.com/ovqDXKuG8I

⚠️AIRBORNE is the “dominant” route for the coronavirus transmission! New PNAS paper by a Nobel laureate’s group concludes this based on study of several studies and how transmission wasn’t truly slow until mask rules went into place. MASKS FOR ALL, please. https://t.co/nmergxbW20

Just 3 days ago Trump was taking all the credit for the stock market. But when it trades down, it’s the Fed’s fault. https://t.co/uRBPLsiq2C