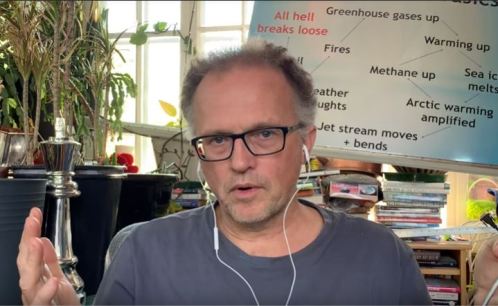 This video is the 1st of 6 where I chat about the most significant recent developments in our ongoing abrupt climate change system. I am simply joining the dots:

I strive to take the latest science and tell a coherent story that is easily understandable to the most novice layperson, using the best, most clearly illustrated gifs that I have come across in social media over several months.
———- ———-

This video is the 2nd of 6 where I tell you all about the story of our weather patterns and how climate is going to hell in a hand-basket.

At the risk of sounding like a broken record, this results from a completely FUBAR-ed jet stream. I show you all sorts of neat video clips and gifs to give you teaching aids so that you can keep your climate denying and Trump thumper friends in a state of cognitive dissonance.
———- ———-

Rampaging Climate Crushes Humans Like Bugs, and Just Getting Warmed Up // May 24, 2019

This video is the 3rd of 6 in my swarm of videos to parallel the tornadoes swarm that continues to wreak cascading havoc on the U.S.A., along with the hydro-attack that is decimating planting schedules and risking global price spikes on grains, soy, etc.; making a mockery of the so called “useful” idiot climate denier who is being enabled by the God-Owful-Party in power.

I’m one to talk; Ontario lost its senses in voting in neomort Doug Ford, while Alberta went nutters voting in Jason Kenney who is set up a “war-room” to attack opponents of his iron rod pipeline of doom.
———- ———-

THREAD: The most important and most under-reported #climatechange story of the year: global methane levels are unexpectedly surging and scientists are ringing the alarm bells, calling on countries to stop methane emissions from fossil-fuel operations. https://t.co/Cky6dll0pV

THREAD: The most important and most under-reported #climatechange story of the year: global methane levels are unexpectedly surging and scientists are ringing the alarm bells, calling on countries to stop methane emissions from fossil-fuel operations. https://t.co/Cky6dll0pV

Multi-decadal climate variability has long been a controversial subject. In our new paper, we suggest in that external forcings – human forcings like GHGs and aerosols and natural forcings like volcanoes and solar – can explain nearly all observed warming: https://t.co/6xsQE5uuuA pic.twitter.com/VtJ7Otd0vv

Also known as Oceanco Y712, and as Project Solar, Black Pearl is the largest sailing superyacht in the world. Its propellers recapture power by turning in reverse under sail and the black dacron sails have solar cells in them https://t.co/lzZ0bBpat3 pic.twitter.com/j9CDNLBual

Remarkable #climatestrike pictures from around the world today–and also great images from the #AfrikaVuka rallies across the continent!! People on the move! @350Africa https://t.co/SMKXPDOfIP