The End Is Near: Paroxysms, Smorgasbords, Earth Life Support

This video is the 4th of 6 in my synopsis of recent significant abrupt climate change induced, “faster than expected” events occurring around our planet under siege.

We tickle tipping points, hurtling towards a highly nonlinear rewiring of our planetary heat distribution, which includes a greatly warmed Arctic and cascading food shortages.

As climate changes much “faster than expected”, humanities response continuous to be ineffectual and much “slower than expected”. We wallow at the beck and call, and in the throes of climate and science denial political leaders.
———- ———-

Smorgasbord of Scariness on our Crazy Climate Disrupted Home Planet: Houston, We have A PROBLEM. // May 26, 2019

This video is the 5th 6 in my smorgasbord of scariness on our recent crazy climate disruption happenings on our home planet. I endeavor to use the clearest, easy-for-anybody to understand, state-of-the-art gifs and illustrations to drive home the latest science on our (Earth’s) climate and weather realities. 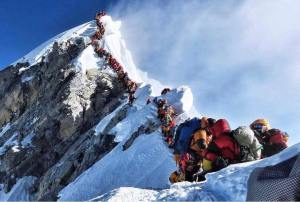 Clearly, climate deniers have long-ago fallen down the rabbit hole of fantasy land, worthy of resurrection of the old TV show known as the Twilight Zone. Reality really does bite, and right-wing ideological denial is clearly exposed, and doubling down on nuttiness.
———- ———-

This video is the 6th of 6 in my motley collection of recent highly significant, profoundly important abrupt climate destabilization occurrences. Our life systems that support all plants and animals are undergoing wrenching paroxysms that are totally re-configuring atmospheric and oceanic circulatory systems vital for transferring heat around the planet to maintain stability in our weather and climate systems.

Thus far, humanity is floundering with feeble and ineffectual gestures to address, let alone even recognize and acknowledge the existential crisis that is upon us.
———- ———-

‪Caption, Paul’s:  ‘Canada is betting on climate failure by doubling down on Alberta oil sands development.

Yes, Justin Trudeau and Catherine Mckenna; this means you. I thought that you both were smarter than this…‬’

Canada is betting on climate failure, By James Kurz in Opinion | May 22nd 2019

Oil and gas extraction has been a cornerstone of Canada’s economy for decades, but plans for expansion of the oil sands represent an enormous economic risk in a world moving to electric vehicles and action against climate change.

The federal and some provincial governments of Canada are not only planning to keep the oil and gas industry running at full steam, but to massively expand it. At the same time, the majority of demand for oil comes from fuel for road vehicles, a segment undergoing a huge technological transformation towards electrification. Canada appears to be grossly underprepared for a future where global demand for oil declines and not only that, our political and industry leaders are currently doubling down on oil as an economic engine — oil that is more expensive to produce than virtually anywhere else in the world.
———- ———-

Over the past 10 days, the U.S. has been battered by severe thunderstorms. There has been 1845 total severe reports, with 231 reported tornadoes. Of all severe reports, 8% of them have involved a tornado. pic.twitter.com/O3Wqlfilza