In my last video I skated on Ottawa’s frozen Rideau Canal and RANTed about abrupt climate change redrawing planetary maps. Now, in the next few video LECTUREs, I show you new peer reviewed scientific papers (free) supporting what I RANTed about.

Tropics are growing by 30 miles (0.5 degrees latitude) per decade; Hadley Cell expansion, but a “tropic squeeze” shrinking is occurring in equatorial regions with heavy rains (Inter-Tropical Convergence Zone, or ITCZ). Since 1920, Sahara Desert has grown by 10%, advancing as much as 500 miles northward.
———- ———-

People used to have to move to experience a new climate. Now, you just have to wait a few years. The North American 100th meridian separating the dry West from the wetter East shifted 140 miles east since 1980. 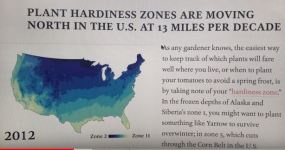 Canada’s Permafrost line has moved 80 miles north in 50 years. Wheat Belts are march poleward up to 160 miles per decade; southern Australia’s is pushing into the sea.
———- ———-

LECTURE THREE: Your City’s Climate is Shifting Beneath Your Feet // Feb 22, 2019 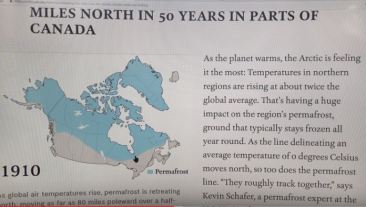 A peer-reviewed science paper on “climate analogues” shows how climate in North American cities is shifting south-south-west by an average of 500 miles within a generation. See how fast and far your own cities climate is going. 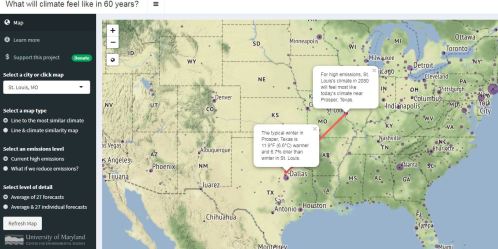 Ref: Startling Interactive Map Shows What Climate Change Will Do to Your City by 2080.  Navigable site, interactive map here:  What will climate feel like in 60 years?
———- ———-

In this video, I mostly talk on how the coldest Arctic air volumes are gone. In fact 80% of the coldest air masses are no longer there. Not just cold air at the surface, but cold air all the way up.

As the entire Arctic continues warming at rapidly accelerating rates it is only a matter of time when sea-ice no longer forms; Greenland melting will cause rapid sea-level rise. Extreme weather severity, duration, and frequency will also skyrocket, and unprecedented weather events like snow in deserts will occur.

‘Trends and variations in the amount of cold air mass in the Arctic and the Northern Hemisphere are evaluated for the 60 year period, 1959–2018. The two indicators are polar cold air mass (PCAM), which is the amount of air below a potential temperature threshold, and negative heat content (NHC), which includes a weighting by coldness. Because the metrics of coldness are based on multiple layers in the atmosphere, they provide a more comprehensive framework for assessment of warming than is provided by surface air temperatures alone‘.
———- ———-

A mere 100 companies are responsible for 71 percent of global climate emissions.

These people are locking you and everything you love into a tomb.

You have every right to be pissed all the way off.

And we have to make them hear about it.#ClimateChange https://t.co/rekR4U61tO

"There are much bigger problems facing the world we live in – specifically climate change": https://t.co/czu9ZVXZSo pic.twitter.com/0y4u2UOx3E

“There are still people who focus on sea level rise and imagine that they’ll be fine so long as they don’t live on the coastline. But this is pure fantasy. No one will avoid the ravages of warming, and that reality will soon be impossible to ignore.” https://t.co/gmD86pt3eQ

Forget about carbon emissions and carbon neutrality – if permafrost continues to melt at current rates, it could be game over for humanity https://t.co/wGRYFUQUBJ

Preventing the Earth from descending into a lifeless husk of a planet in a geological blink of an eye is technologically possible, experts say. But it will require confiscating unearned wealth from billionaires and ending the pointless wars we've been fighting for generations. https://t.co/vSiVeoqV82