Arctic Report Card 2020 (ARC2020):  Result: FAIL
Summary: Out with the Cold; in with the Hot
Consequences: Dire

1) Average annual land surface air temperature north of 60 degrees for October 2019 – September 2020 was the second highest on record since at least 1900.

3) August mean sea surface temperatures in 2020 were 1 to 3 degrees C warmer than the 1982-2010 August mean over most of the Arctic Ocean, with exceptionally warm temperatures in the Laptev and Kara seas that coincided with the early loss of sea ice in this region.

8) Extreme wildfires in 2020 in the Sakha Republic of northern Russia coincided with unparalleled warm air temperatures and record snow loss in the region.

9) Tundra greenness trends diverged strongly with a sharp decline in North America and rise above long-term average in Eurasia.

11) Glaciers and ice sheets outside of Greenland have continued a trend of significant ice loss, dominated largely by ice loss from Alaska and Arctic Canada.

Ref 1: About Arctic Report Card 2020:  ‘The Arctic Report Card (hereafter ‘ARC’) has been issued annually since 2006. It is a timely and peer-reviewed source for clear, reliable, and concise environmental information on the current state of different components of the Arctic environmental system relative to historical records. The ARC is intended for a wide audience, including scientists, teachers, students, decision-makers, policymakers, and the general public, interested in the Arctic environment and science.’ 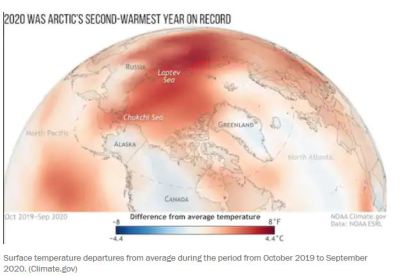 ‘The Arctic as we once knew it, an inhospitable, barely accessible and icebound place, is gone. Climate change has transformed it into a region that can heat up to 100 degrees, is beset by ferocious wildfires, and is covered in permafrost that is no longer permanent. The sea ice cover that has long defined the Far North is fast disappearing. This is the picture from a new international scientific assessment released Tuesday.‘

In 2020, the Arctic was hotter than ever (podcast, CD quality) changing weather and climate (Lo-Fi) around the world. We investigate breaking news; science with our friendly Canadian scientist Paul H. Beckwith. Paul is now the largest single source of climate videos on YouTube.
———- ———-

"We must shift focus from mid-century net-zero targets to immediate, real emissions reductions in our own high-income countries. Reductions of at least 10% per year are needed."

“We don’t have a single documented case of covid-19 transmission from surfaces. Not one. So why, then, are we spending a small fortune to deep clean our offices, schools, subways and buses?” https://t.co/0tHa2NknhL

101 in how not to inspire confidence pic.twitter.com/kq0LKacpF6

The EUs so called "55% reduction target by 2030" has got nothing to do with a real 55% emission reduction.
Our article from October explains why all the proposed EU targets are far from being in line with the #ParisAgreement #FightFor1point5 https://t.co/PzORItH05C

I am very disappointed/devastated that Trudeau's "big" #climate announcement at the 5th anniversary of #Paris leaves in place Harper's target. A target wholly incompatible with the Paris goal of 1.5 degrees. Funding pipelines and fracking. #GPC #unacceptable