Since the Cold War between the world’s major superpowers ended, people have become very complacent about the threats of nuclear war. A new research paper shatters this illusion by showing that even a relatively small and limited nuclear war between India and Pakistan, apart from killing more people in those countries (50-125 million) in less than one week than all World War II fatalities, would block 20 to 35% of surface sunlight and cool the surface 2C to 5C causing global crop failures; thus causing mass starvation and additional worldwide mayhem.

Ref:  India-Pakistan nuclear war could kill millions and threaten global starvation:  A study conducted by researchers from the University of Colorado Boulder and Rutgers University examines how such a hypothetical future conflict would have consequences rippling across the globe. Today, India and Pakistan each have about 150 nuclear warheads at their disposal, and that number is expected to climb to more than 200 by 2025. 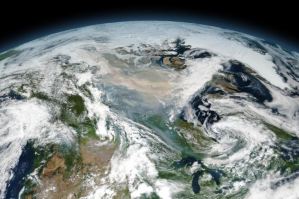 ‘A giant cloud from 2017 Canadian fires lingered in the atmosphere for a year, showing scientists how a cloud from a nuclear bomb would behave‘.
———- ———-

“The melting is big and early,”

"What seems clear now is that Greenland is no longer changing in geological time. It is changing in human time."#ClimateCrisis #ActOnClimate #ClimateChange https://t.co/Vq6HG6CKEn

There are not "duelling rallies" at #ableg like some media reporting. There are, by some estimates, 10,000 people demanding serious #ClimateAction and maybe 30 people here in climate denial with Trump hats. #abpoli #climatestrikecanada #cdnpoli #FridaysForFuture #GretaInAlberta

This feels like the biggest crowd I’ve ever seen outside at the Alberta Legislature. Crowd chanting “hey hey, ho ho, Jason Kenney has got to go!” #ClimateStrike #yeg #ableg #elxn43 pic.twitter.com/z11ELMv5W5

Fun Fact: Alberta’s oil sands clean up is estimated to be up to $260 BILLION and counting. Alberta has only collected $1.6B. 🤔

If oil companies strategically default, taxpayers would be on the hook for that clean up. 🤷‍♂️#cdnpoli #ableg #Greta #elxn43https://t.co/55oLwsm5IN