Earth stopped getting greener 20 years ago. A new research study used satellite images to determine that plant growth on land increased in the 1980s and 1990s, but reached a turning point in 1998, and has since been decreasing. 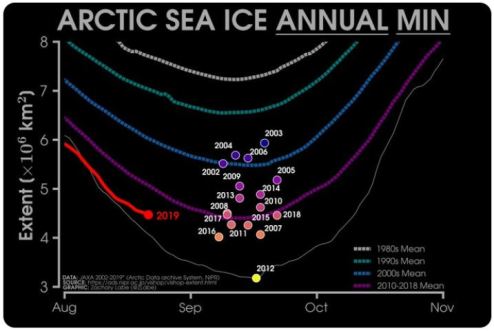 ‘The world is gradually becoming less green, scientists have found. Plant growth is declining all over the planet, and new research links the phenomenon to decreasing moisture in the air—a consequence of climate change. * The study published yesterday in Science Advances points to satellite observations that revealed expanding vegetation worldwide during much of the 1980s and 1990s. But then, about 20 years ago, the trend stopped. *

‘Since then, more than half of the world’s vegetated landscapes have been experiencing a “browning” trend, or decrease in plant growth, according to the authors. * Climate records suggest the declines are associated with a metric known as vapor pressure deficit—that’s the difference between the amount of moisture the air actually holds versus the maximum amount of moisture it could be holding. A high deficit is sometimes referred to as an atmospheric drought‘.

‘Atmospheric vapor pressure deficit is a critical variable in determining plant photosynthesis. Synthesis of four global climate datasets reveals a sharp increase of VPD after the late 1990s. In response, the vegetation greening trend indicated by a satellite-derived vegetation index, which was evident before the late 1990s, was subsequently stalled or reversed… Six Earth system models have consistently projected continuous increases of VPD throughout the current century‘.
———- ———-

It is well known that global vegetation decline is worsening from:

But some regions like the Arctic are greening. We also know that the maximum amount of moisture air can hold at saturation goes up by 7% per degree C temperature rise.

Ref:  ‘Global water cycle amplifying at less than the Clausius-Clapeyron rate‘, Nature-Published: 09 December 2016, ‘Understanding and quantifying observed global water cycle change is key to predicting future climate. The Clausius-Clapeyron relationship predicts an increase in the water holding capacity of air (the saturation water vapor pressure) of approximately 7% per degree Celsius rise in temperature2. It has been suggested that this would lead to a strengthening of the global evaporation (E) minus precipitation (P) pattern with global surface warming…‘
———- ———-

#28 The climate plan that @BernieSanders just released is remarkable–it shows what simply must be done to meet the challenge physics has laid out. (And it would save a fortune by helping to keep heating under some kind of control) #demunitytwitterprojecthttps://t.co/q6Ojul5Xq5

Why are there fires in the Amazon?

Any thoughts on slowdown. Perhaps negative feedbacks are kicking in:
– the thinner and more broken up the ice gets, the more it spreads, cooling air and surface water
– more clouds over open water raise albedo, causing cooling
– ice confined to center results in much less export https://t.co/Gi2j5daXLp