A combination of extreme temperatures and high humidity, called heat index, humidex, etc. can be calculated many ways; the net result: when you reach wetbulb temperature (defined as temperature at which air “parcel”reaches 100% humidity) of 35 C (95F) or higher your body cannot cool via sweating, since your sweat no longer evaporates.

Core body temperature rises, you get heat exhaustion, heat stroke, and die within 6-8 hours. Many mortalities in the European heatwave in 2003 (plus Chicago event) were likely due to dwelling temperatures; humidity from cooking, etc reaching this fatal physical limit.
———- ———-

When, and where will people start dropping like flies as wetbulb temperature (defined as temp. when relative humidity is 100%) is 35 C (95F) or higher. We know where.

Outside, on coastlines of the Red Sea, Persian Gulf, etc. when Sea-Surface Temperature (SST) reaches 35 C; we’ve hit 33 C in previous years, perhaps higher in shallow water, with little upwelling, or even in small inlets or near hot rivers or lakes.  Two degrees C summer SST is the difference between life and death, death within 6-8 hours. Inside apartments, in big cities due to Urban Heat-Island effects…
———- ———-

Let’s say it is 45 C (113 F) in a city in the Middle East or India, on a coastline where the Sea-Surface-Temperature has reached 35 C (95 F). Since the land is hotter than the water there will be a sea-breeze (from water to land), that will be laden with moisture from evaporation of sea water.

When there is enough water vapour to bring relative humidity over the coastline to 52% or higher, but not enough for monsoonal rain, then people on the coast, outside, will die in 6-8 hours due to a physical limit imposed by our core body temperature. That is the brutal physics of wetbulb temperature and human physiology.
———- ———-

Air Conditioning Access Divides those who get to Live from those who DIE: Class-divides Brutal // Jun 16, 2019

Suppose the rural area near New Delhi is 50 C (122F), dropping to 30 C at night. Society divides into those with access to air conditioning, and those without, as long as rickety power grids hold up to demand spikes. AC runs 24/7 for owners.

Those without are SOL (shi*-out-of-luck) as waste heat cranked out by ACs to the street is hot and humid, and adds to the urban heat island effect, driving up outdoor street temperature and humidity, especially in confined alleyways to above lethal wet-bulb temperatures. So poorer AC-less people die so that the wealthier AC folk live. Yuk.
———- ——————– ———-

Brilliant ideas: Produce a simple combined digital thermometer, and a relative humidity sensor that is tiny and wearable. This device calculates and displays wet bulb temperature of your immediate space, inside or outside. It activates alarms when dangerous wet bulb conditions are reached.

It sends alerts and your location to emergency responders who come and get you for emergency medical aid and transport to save your life. Combine it with what I call a “chill suit or device” from India’s Dharma Technologies, to keep your core body temperature safely stable at all times.
———- ———-

‘Climate truth is breaking into the mainstream. Like this headline from USA Today: “End of civilization: climate change apocalypse could start by 2050 if we don’t act”… But this USA Today story is just one blip buried in celebrity news and the Donald Trump show. Still – maybe soon they will hear about Radio Ecoshock and Paul Beckwith.  Paul is a regular correspondent here….

HITTING THE CARBON GAS PEDAL
‘Paul has a little more company now as big papers like the New York Times, USA Today, and the Guardian UK are starting to report on the developing climate disaster. Behind that news, Mark Kaufman at Mashable jolted me with the basics. It’s not just that we are adding billions of tons of greenhouse gases to the atmosphere again this year. We are doing it faster. He writes, quote:

‘“After the Scripps monitoring station atop Hawaii’s towering Mauna Loa went online in 1959, CO2 rose around just 0.7 [parts per million] ppm per year in the early decades of operation. Then, in the 1990s, the rate increased to 1.5 ppm per year. The last decade has averaged 2.2 ppm. Yet, in the last year [2018], it was a 3.5 ppm gain. Concentrations of the planet’s most influential greenhouse gas are accelerating.”

That is the scariest news of all. We are literally hitting the gas pedal, as we drive toward the cliff. Isn’t that what is behind everything else we talk about?’
———- ———-

‘Paul gives a talk on Abrupt Climate Change as part of the Kanata-Carleton Federal Riding nomination meeting for the Green Party of Canada.

Introduced by Charles Gregoire of Ottawa.  He and his wife Heidi are both also very closely connected to the brainchild of Eco-strategist, Stuart H. Scott’s Scientists Warning to Humanity.

Our long time helper, David Korn, is also connected to SW2H.  We all know each other here.  A great contribution by Charles and Heidi both and the tirelessly productive, Stuart H. Scott of ClimateMatters.tv.

Something to look forward to. What our future will look like according to famous dystopian movies. Source: https://t.co/YY0mwl8jJ7 pic.twitter.com/bR3BkPYNr7 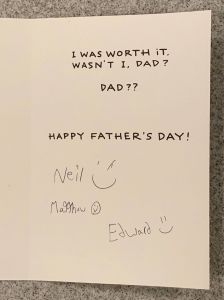 What does the US spend more on than defence?

A fantastic evening last night with #Greens from across #Ottawa! All smiles with Gordon Kubanek for #Carleton, Angela KH for #OttawaCentre, Oriana for #OttawaVanier, Elizabeth May #GPC Leader, Paul Manly in #NanaimoLadysmith, and Jean-Luc Cook for #Nepean and GPC Pres! #GreenWave pic.twitter.com/HO4FRV2OK1