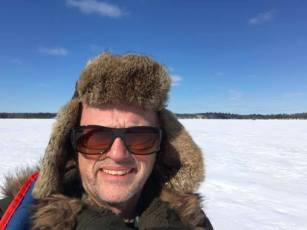 Between 60,000 and 22,000 years ago there were numerous abrupt temperature fluctuations recorded by oxygen and nitrogen isotopes (paleo-thermometer proxies) in Greenland ice cores [1].  Temperatures over parts of Greenland rose by up to 16.5 C within a decade or two, in the largest of these so-called Dansgaard-Oescher (D-O) Oscillations.

I chat on the latest science, about how a lack of Arctic sea-ice was the primary factor. This is crucial info to help us figure out what will happen to Greenland when we have no surrounding sea ice left.

“For years scientists have been puzzled about the correlation between Arctic sea ice loss and the extreme climate events found in the ice core record. There were at least four theories being mooted and for two years we’ve been investigating this problem. I’m delighted that we have proven the critical importance of sea ice using our numerical model simulations.

“The summer time sea ice in the Arctic has experienced a 40% decline in the last few decades, but we know that about two thirds of that reduction is caused by human-induced climate change. What we now need to determine is, what can be learnt from these past sea ice losses to enable us to understand what might happen next to our climate3.”
———- ———- 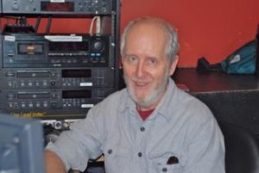 Always a favorite, interview posted on February 14, 2019, by Radio Ecoshock, with master interviewer, Alex Smith.  The End of Ice:

‘Greenland, Antarctica, South America, the Himalayas – it’s all going, the ice is leaving the Earth.

This is a whirl-wind roundup of new science with Ottawa climate expert Paul Beckwith. We talk pollution (is it saving us?), vanishing glaciers, Tasmanian dry lightening fires, James Hansen’s latest, tech to draw down carbon dioxide, and why this scientist made 500 videos to educate and warn the public via YouTube‘.
———- ———-

The study found that the world’s seven major industrial democracies spent at least $100 billion a year to prop up oil, gas and coal consumption at home and abroad in 2015 and 2016 despite their pledge to end fossil fuel subsidies by 2025.#ClimateChange https://t.co/Pq3aGf2Azs

Bitter Ann Coulter scolds Trump’s wall plan: ‘The only national emergency is our president is an idiot’ https://t.co/szVpzK8SRW

In the past fifty years, average February temperatures in Utqiagvik, America’s northernmost city, have risen *11 degrees*.
Arctic Alaska is experiencing the birth of a new climate. https://t.co/D2EQAVsLME

David Wallace-Wells writes, "Being alarmed is not a sign of being hysterical; when it comes to climate change, being alarmed is what the facts demand. Perhaps the only logical response." https://t.co/EpvzWhfWVa