Will Irma be a Superstorm Like Harvey? Two Video Tutorial

Posted on September 5, 2017 by paulbeckwith

Me, after I saw the latest forecast for Hurricane Irma

The US and European Weather Models are both forecasting a strike on the US from Hurricane Irma. I teach you how to find important factors like ocean surface temperatures along the storm path, jet streams that can direct, block, slow, or speed up the hurricane, and thus let us find out how long the storm may stick around.

I also show you where to find real-time instantaneous expert views on the progression of Irma. Will Irma be more like Katrina, Sandy or Superstorm Harvey?  How has climate change monkeyed with our Jet Streams???

All eyes are on Hurricane Irma. Yet the x is a tropical disturbance in the Gulf of Mexico which is where Harvey originated. 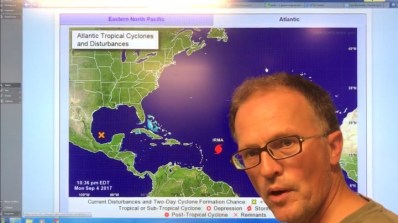 Behind Irma (hidden by my head) is a tropical disturbance formed off Africa near where Irma formed. If either disturbance grows bigger it will be named Jose, next would be Katia (see below).

Hurricane Irma (by my glasses) and Jet Stream pattern. 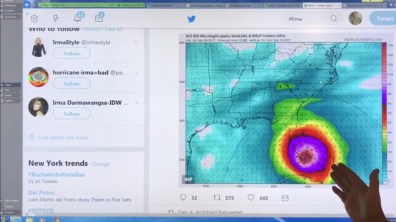 Best place for instant expert updates on Irma is to go on Twitter (join if you aren’t on) and search for #Irma, selecting Top posts and also Last posts (also follow me @PaulHBeckwith and say hi:)

My cannonball attempt to create a storm surge or tsunami. Educating you on abrupt climate change is stressful and needs decent coping skills.
———- ———-

1 Response to Will Irma be a Superstorm Like Harvey? Two Video Tutorial