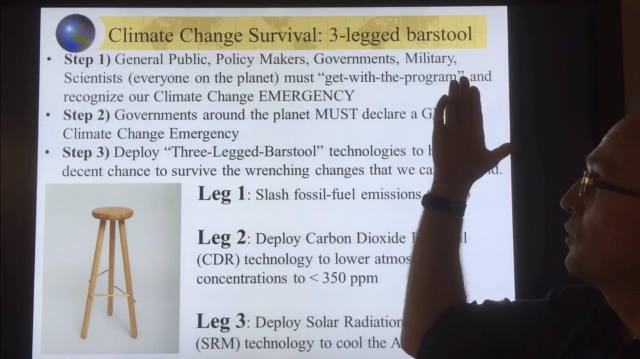 I build a very strong scientific case showing that our climate system is spiraling out of control, threatening our very survival on Earth. I then discuss how government leaders around the planet must declare a climate change emergency. This would open up money and resources to deploy the three-legged-bar-stool survival strategies:

Also, below the third video, be sure NOT to miss Arctic Methane Emergency Group’s John Nissen’s letter, produced as a proposal for COP22.  About AMEG, here.  Version 2 is approved for sharing here (at bottom of post).
———- ———-

Here is a copy of the powerpoint slide presentation, called: ‘paul_climate_emergency_barstool_nov_18_2016-final‘.  Cloud version here for those of you who might not have or use Microsoft Office–has fifty images.

[dk:  the version from the last post had fifty-two images.  And similar as it might look to the one from three days ago–for those of you who use or look at such things, Paul tells us, they are not the same.]
———- ———-

Please consider supporting my work with a donation, through the PayPal donate link.  Very easy to use.
———- ———-

For the attention of COP22

Unfortunately evidence indicates that these assumptions are no longer valid. The Earth System is showing signs of moving ever faster away from the old norm of the past thousands of years: the Holocene period of remarkably stable temperature, climate and sea level, which allowed crops to be grown, trade to take place and civilisation to develop. The changes are happening most rapidly in the Arctic where there is acceleration in warming and melting, mainly due to the “albedo positive feedback” effect whereby, as snow and sea ice retreat, more heat is absorbed by exposed land and water.

There are four significant effects of this accelerated warming in the Arctic:
• accelerated melt of the Greenland Ice Sheet with associated sea level rise;
• accelerated discharge of methane from permafrost both under the seabed and under the land surface with associated greenhouse warming effect;
• accelerated disruption of the jet stream with growing weather extremes in the Northern Hemisphere;
• a growing contribution of radiative forcing to the planet’s energy budget, which will inevitably lead to additional warming of the rest of the planet.

Considering that the planet is already suffering from climate change and sea level rise, which both are liable to get worse with levels of greenhouse gases rising and accelerated warming in the Arctic:-

COP should adopt a new overall objective of restoring the planet to the safe conditions enjoyed for thousands of years of the Holocene. In this process:

(i) global temperature should be kept below 1.5C with respect to its pre-industrial level;
(ii) CO2 in the atmosphere should be reduced to its pre-industrial level, which involves a massive CDR effort coupled with drastic cuts in CO2 emissions;
(iii) emissions of other significant GHGs (especially methane) should be reduced to pre-industrial levels;
(iv) the Arctic should be quickly cooled as a precaution against further sea ice retreat, further escalation of sea level rise, further escalation of methane release from permafrost, and further disruption of the jet stream leading to further rise in Northern Hemisphere extreme weather events;
(v) the Arctic albedo should restored to the level of at least thirty years ago.

To make such a huge undertaking acceptable to world leaders, it is necessary to show that there is a good business case, with jobs and food security. And there has to be a means of funding which is equitable and allows businesses to optimise their profits without jeopardising the health of the planet.

There needs to be a level playing field, so that all exploiters of fossil fuel pay a carbon levy, based on the greenhouse gas emissions it will cause. Thus CCS will effectively obtain a rebate. Exploiters of natural gas will have a levy based not only on CO2 emitted on consumption but also on fugitive methane.

Since it is not possible to determine in advance the costs of CDR and methane suppression, there will need to be an initial levy which is ramped up over time according to the effectiveness in removing CO2 and suppressing methane. The fossil fuel industry will have a financial incentive to make these processes efficient and avoid undue increases in the levy which would hit their bottom line.

There needs to be some regulation, since it is desirable that the CDR and methane suppression is done in ways which have benefits for housing, food production, water management, job security, biodiversity, etc. This is where the UN has a key role: in setting the regulation mechanisms and the means of policing them.

There are many techniques for CDR and methane suppression which have such benefits in forestry, agriculture and aquaculture.

Forest management can ensure that carbon is captured for the long term, with the benefits of providing wood for buildings and increasing biodiversity. Agricultural practice can increase carbon in soil through the development of crops with longer roots.

Crop residues can be heated pyrolytically to produce a combination of biofuel and biochar, the latter being returned to the soil for improvement of crop yields and water management, also reducing the requirements for artificial fertiliser which is carbon intensive in its production.

Methane suppression using diatoms can likewise improve crop production, e.g. in paddy fields. It can purify local water supplies for the benefits of crops and human consumption. Dispersal of diatoms with appropriate nutrients over wetlands, lakes and oceans can reduce methane, while oxygenating water and stimulating the food chain. Thus fish stocks and other marine food sources are increased, providing food for human consumption as well as increasing sustainable biomass for the planet as a whole.

Another CDR technique with great potential involves the crushing of olivine rock and its accelerated weathering to remove CO2 and create carbon-retaining substances. This technique has a major direct benefit of increasing ocean alkalinity, e.g. when the crushed rock is spread on beaches where wave action can accelerate its weathering.

If such techniques are insufficient, or cannot be brought up to speed quickly enough, then direct air capture has to be considered. At present it is extremely expensive compared to other techniques. But this cost may come down to make it competitive, so intensive research and development effort is recommended.

The cooling of the Arctic and restoration of albedo has obvious benefits for the wild life and indigenous peoples of the Arctic, e.g. polar bears which rely on sea ice for their hunting. There is also potential for capturing methane as a fuel; methane is bubbling up from the ocean seabed in vast quantities, and might be captured under the sea ice or deliberately created “ice shields”.

This is an example of an opportunity for methane suppression to be combined with albedo enhancement. Another example is the floating of mats containing diatoms and nutrients, which can enhance albedo while helping to remove CO2, reduce acidification, oxygenate the water and promote methanotrophs which digest methane dissolved in the water. In this case there is an added benefit of promoting the marine food chain for the benefit of marine life and fishing.

To get the process started, COP22 should consider:

• a new initiative combining aggressive CDR, methane
suppression and CO2 emissions reduction, such that global
warming can be halted at 1.5C or less within a few decades;

• a new initiative to cool the Arctic and
restore albedo to the level thirty years ago;

• an overall plan to restore the Earth System to
such conditions as allowed civilisation to flourish
over the past thousands of years known as the Holocene;

• an initiative of public education in the
understanding of this plan;

• a conference bringing together representatives
of governments and the fossil fuel industry to
present the business case for funding large-scale
interventions out of a carbon levy.