There is very little Arctic sea-ice left this year. The trend is a rapid decline to essentially nothing (- 1 million square km); the “blue-ocean event” as I call it (should have trademarked this).

If the ongoing massive cyclones continue to shred the ice over the next 4 or 5 weeks of this summers melt season, then “nothing left” could be this year; otherwise before 2020 is an excellent wager.

The devil is in the details; I teach you how to find the details that you need to do your own assessment (Google here, for recent images of arctic sea ice graphs.  Neven’s Arctic Sea Ice Blog).  Below graph, compliments, Robert Scribbler’s ‘July was the Hottest Month Ever Recorded; 2016 Set to Make 1998 Look Cold by Comparison‘.  Links to both Climate Reanalyzer and Earth Null School. 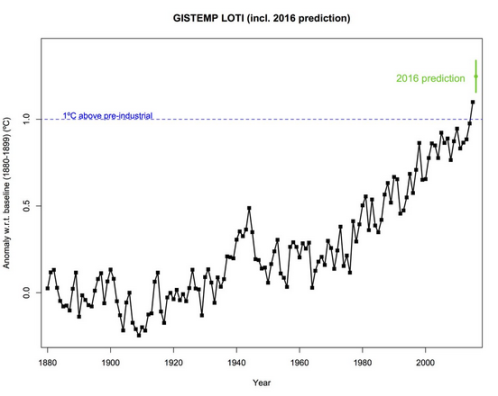 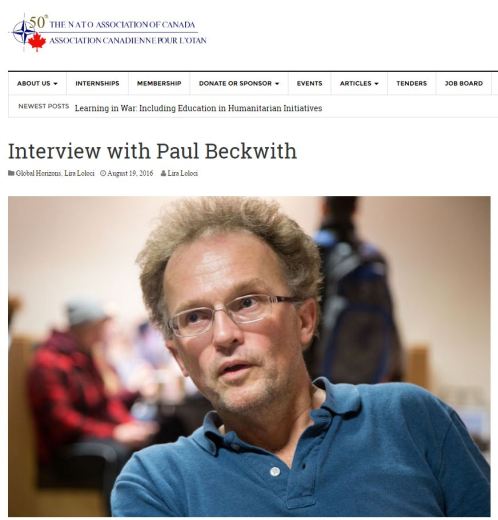 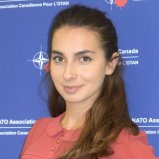 ‘On behalf of NATO Association of Canada, I had the privilege to interview Paul Beckwith, climate system scientist and part-time professor in Climatology at University of Ottawa, working on his PhD in abrupt climate change. Mr. Beckwith discusses the main challenges that we are facing when it comes to climate policy, biggest environmental concerns to Canada, and geoengineering as an alternative to tackling climate change.

Please tell us a bit about your educational background and any current undertakings that you are working on.

I’m a part-time professor at the university of Ottawa, where I teach Climatology and Meteorology. I have a B.Eng. Engineering Physics degree and M.Sc. Physics degree in laser optics, a field in which I worked for many years. I’ve always been concerned with climate change and decided to formalize my knowledge by coming back to university to study and teach climate change. My research topic is abrupt climate change, which deals with how quickly the climate system is changing now, how quickly it has changed over the past, and from that information we can hopefully determine how fast it will be changing in the future. 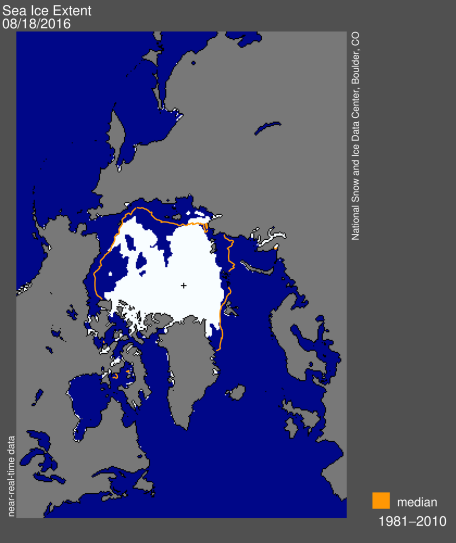 National Snow and Ice Data Center, 18 hours ago (about 7:50 am Friday)

In the context of abrupt climate change, what would you say is the biggest security threat that Canadians are facing?

I think Canadians and just about anybody else in the world is facing similar threats. I like to call it “death by a thousand cuts”. We have a fairly resilient society, cities and what we are seeing is that extreme weather events are rapidly rising and affecting our society negatively. Toronto had a big flooding in the summer of 2013, a few weeks after Calgary had one. Around the same time, Colorado had a flooding two months after. Currently, we are seeing vast portions of Louisiana under water. We also have had droughts, which threaten food security. So I see food security as being one of the main problematic issues as a result of abrupt climate change events.

It can all be related to the Arctic warming, which is quickly losing sea ice in the summer and snow cover in the spring. As a result, the Arctic is getting a lot darker, absorbing a lot more solar radiation, meaning that it’s heating up much faster that the equator. All of these things are causing more extreme weather events, and as a result because it is warmer, there is about 7% more water vapour in the atmosphere than there was in the pre-industrial levels. This is causing our resources to be used up, major damages in infrastructure and damages to people’s health.

You attended the COP 21 conference in Paris, which for the first time reached an agreement requiring all nations to pledge action on climate change. However, given that there is no actual binding mechanism in international agreements, how would you rate the success of the COP 21 conference?

Paris was important and it did achieve more than previous conferences had done, but I didn’t get a sense of urgency from policy-makers …. Full interview, continues here.
———- ———-

Its nice to have Extinction Radio back.  My interview with Michael Ferrigan here:  ‘Conversation with Paul Beckwith: Jet Stream and POTUS Election‘, starts at 1:24:09 mark (84:09), by clicking here.  About 24:26 long.  Thank you Mike.  A lot of hard work was done previously by Gene, Peter, and Ivy.  And now Mike, Susan, and Oliva similarly continue this labor of love.  Thank you for the inclusion.  I am always glad to return, and support their getting the message out.  Speaking of message:
———- ———-

Easy to use Please Donate feature, simply click here.  More to come… Where will we be in a year?  This site started eleven months ago, and went live in November.  Every bit helps.  Thank you!  Each of you who help, make this all be able to continue as it is.  Thank you twice.