Profound Implications of a Completely Salt-Free Arctic Ocean as Recently as 60,000 Years Ago 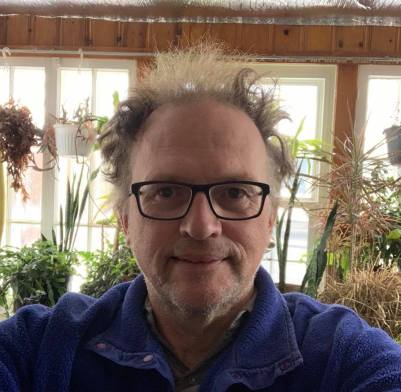 A ground-breaking new finding in climate recently just occurred, and it seems blindingly obvious, in retrospect. In fact I became very close to figuring this out all by myself, many years ago.

During extremely cold, long duration ice ages, at two different periods in the last 150,000 years; namely (a) 60,000 to 70,000 years ago, and (b) 130,000 to 150,000 years ago; the entire Arctic Ocean was fresh liquid water, entombed underneath a thick ice layer, and separated from the Pacific Ocean by land, and from the Atlantic Ocean by a combination of land and grounded ice shelves, with only small passages where fresh water would exit, keeping salt water from entering. How was this possible? 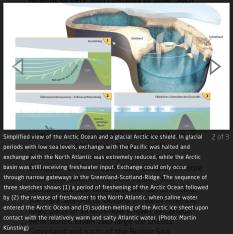 During these exceptionally cold, long duration cold periods there was so much water stored within the glacial ice that global sea levels were lower by 130 meters (430 ft). With sea levels this low, the Bering Strait sea floor became dry land, as well as all the gaps within the Canadian Archipelago and the Nares Strait. There was no water channel connection to the Pacific Ocean at all.

Lots of fresh water still entered the Arctic Ocean, from meltwater, northern rivers, rainfall, and snow melt. Therefore, over time freshwater built up in the Arctic Ocean basin, floating above and eventually forcing out the remaining salt water near the ocean floor.

When these ice ages ended due to Milankovitch Cycle changes in Earth’s orbit around the Sun, and the Earth started warming, the sea level rose again and the ice shelves thinned, releasing huge amounts of fresh water back into the Atlantic Ocean and then the Pacific, causing enormous wrenching temperature swings and abrupt climate oscillations until the climate system again reached stability.

Ref:  [1]  The Arctic Ocean was covered by a shelf ice and filled with freshwater, February 3, 2021. Alfred Wegener Institute, Helmholtz Centre for Polar and Marine Research:

‘The Arctic Ocean was covered by up to 900 m thick shelf ice and was filled entirely with freshwater at least twice in the last 150,000 years. This surprising finding is the result of long-term research. With a detailed analysis of the composition of marine deposits, the scientists could demonstrate that the Arctic Ocean as well as the Nordic Seas did not contain sea-salt in at least two glacial periods.

‘Instead, these oceans were filled with large amounts of freshwater under a thick ice shield. This water could then be released into the North Atlantic in very short periods of time. Such sudden freshwater inputs could explain rapid climate oscillations for which no satisfying explanation had been previously found.‘

I just filmed a whole bunch of videos on the Arctic.

This video is kind of an overall series introduction, where I discuss some personal stuff in my life, the awesome books that I am reading, and then the Arctic. Basically I am just shooting the breeze, but I think you will find some interesting nuggets and hints on an enormously significant new finding. Namely, from about 60,000 to 70,000 years ago, and from 130,000 to 150,000 years ago, the Arctic Ocean basin was composed of completely fresh water, with the frozen ice on the surface.

How is this possible. Stay tuned; lots of videos to follow!! 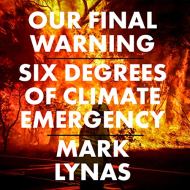 Ref: Stephan King, Sleeping Beauties, The Case for Mars: The Plan to Settle the Red Planet and Why We Must, Bill Gates, How to Avoid a Climate Disaster: The Solutions We Have and the Breakthroughs We Need, Our Final Warning: Six Degrees of Climate Emergency,
———-

Animation showing how different categories of daylight/twilight/darkness change throughout the year by latitude. pic.twitter.com/MBhZPqcyRV

Almost 10 years after scientists discovered the first cracks, a huge iceberg broke off from the Brunt Ice Shelf in Antarctica pic.twitter.com/NuzP7wvHxX

You would be forgiven for thinking it is early summer. We are at the peak of this European winter 'heatwave'.

The Northern Sea Route through the Arctic north of Siberia is now open. In February.

There is no multi-year ice left there anymore.

We are in a climate emergency. https://t.co/HwOSSkD6o7