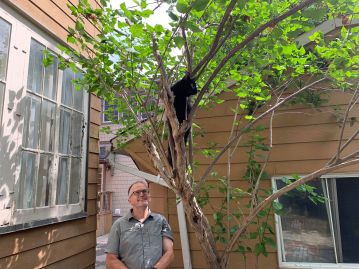 My son Neil put him in the tree low down, and Shack wanted to go higher. Neil then took the photo, and climbed on a chair to get him down. He seemed to like it up there; he trusts us:) He is normally an indoor cat, but very adventurous!

I am training him to go backwards down a tree; cats cannot normally do that, and thus get stuck. The tree is like a one way street to them; up only…
———- ———-

I have perfect timing starting this video. My face is illuminated by lightning and then seconds later you hear the thunder. Pop Quiz: How far away was the lightning bolt? A while ago, Michael Mann and others published a paper on how jet streams tend to get amplified and stuck in a persistent, quasi-resonance with wavenumbers 6 to 8 (Ridge-Trough wave pattern repeats 6 to 8 times around the Earth) .

I introduce you now to a new paper that finds modes 5 and 7 can cause simultaneous crop reductions in vital farming areas in North America, Europe, and Russia. This is obviously a huge threat to our global food supply.

‘Persistent episodes of extreme weather in the Northern Hemisphere summer have been shown to be associated with the presence of high-amplitude quasi-stationary atmospheric Rossby waves within a particular wavelength range (zonal wavenumber 6–8). The underlying mechanistic relationship involves the phenomenon of quasi-resonant amplification (QRA) of synoptic-scale waves with that wavenumber range becoming trapped within an effective mid-latitude atmospheric waveguide.’
———- ———-

Punching Through the Front of a Storm as it Tracked from Ottawa to the US Border // Jun 29, 2020

Just for FUN; yesterday I spend 4 great hours in the car tracking a nice storm system from Ottawa southward to the US border, a distance of over 100 km (60 miles). There was no jet stream or wind shear to cause rotation, thus no tornadoes, however there was torrential rain with some hail.

My dashboard mounted camera picked up the action as I punched through the storm at the front side. You see beautiful skies, lots of rolling dark clouds and very detailed and majestic cloud structures that made my road trip a success.
———- ———-

More Science on Jet Stream Rossby Wave Blocks and Consequences to Humanity and Our Societies // Jun 24, 2020

I continue to chat on blocking changes under climate change acceleration, and how the consequences are very bad for humanity and societies. The number of people directly affected by blocking is proportional to the size of the region under the ridge which has been found to be proportional in turn to the thickness of the jet stream times the wavelength of the Rossby Wave modified by a curvature factor of the wave. Wave resonances of the jet stream Rossby waves with the land-ocean contrasts and the topography of the Earth (orography) can result in simultaneous crop failures, as I discuss in further detail in some videos to follow.
———- ———-

As I explained previously, slowing, wavier jet streams (less West-to-East zonal winds; more North-to-South meridional winds) cause the likelihood of atmospheric blocks to be much greater.

The persistent quasi-stationary ridge in the Arctic over Siberia is extremely concerning, and will quickly accelerate degradation of Arctic Sea Ice, permafrost breakdown with associated methane emissions, and Greenland glacier melt with rapid sea level rise. I continue to chat about how blocking changes with rapid climate change acceleration, and how consequences of this change are very bad news for humanity and society.
———- ———-

Extremely hot again on the fringe of the Arctic Ocean.

Note how much open water there is compared to normal. Sea ice is taking a hit. pic.twitter.com/y0w5PLjkHx 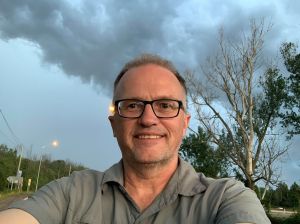 "Now, more than ever, we need to think differently. But just as important as imagining a better world is putting the actual work in to build it. That may feel hard, but as Holthaus notes, 'the old world is dead—what comes next is up to us.'” https://t.co/6lC4MKR1Wa

The south pole warming:
"This was not well predicted by climate models, meaning we are further along when it comes to the destabilisation of ice sheets and the commitment to rising sea levels than we expected to be at this point," Quote @MichaelEMannhttps://t.co/DM3yXSSgqr