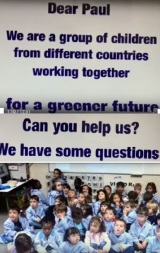 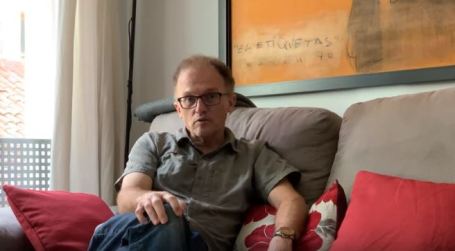 I am extremely happy and grateful to post this video and the next two from my adventures in Madrid, Spain at COP25. My friend Alfonso Soria put out the word to his many teacher friends across Europe that climate scientist Paul was in Madrid.

Teachers in different countries recorded their kids (of all different ages) asking me questions on global warming/climate. The questions were awesome! Enjoy this holiday treat; I found it very touching. Thank you kids and teachers!!
———- ———-

This is a series of annual special reports for CMD from guest contributor Alex Carlin about his observations at the United Nations climate conference — and this year from the “People’s Summit” in Santiago, Chile as well.

‘Shifting “Center of Cold” Underscores Critical Need for Climate Restoration
December 13, 2019–Here at the UN Climate Change Conference in Madrid (COP 25), I ran into a great scientist whom I have followed for years, Paul Beckwith. Paul is a renowned climate system scientist at the University of Ottawa, who puts out many informative and entertaining videos that have helped innumerable people, including myself, get up to speed on what he calls “abrupt climate system change,” where you ask questions like,

”will Earth become Venus any time soon?” In fact, his videos were my first entry into climate science, and I found them to be extremely well done, effective, and fun to watch.

As I interviewed Paul here, he enlightened me about Greenland becoming the “center of cold” in the Arctic. That is, if we don’t prevent the Arctic Ocean from losing its perennial ice, it will become a blue water ocean for most of the year, and Greenland will be colder than the North Pole.

Paul said, “This will lead to profound changes. Greenland is going to be exposed, and melt rates are going to go way way up,” leading to biblical sea level rises. But beyond submerging Miami, he explained that,

The center of cold in the Arctic will move fairly far to the south: from the North Pole (90 degrees North) to the center of Greenland (73 degrees North). So, since the jet air streams which travel around the Earth actually circle around the ‘center of cold,’ this will cause them to become even wavier than they are now, and also it will bring a jet stream ‘trough’ over North America for extended periods of time.

Huge precedent! "The Dutch Supreme Court ruled the Netherlands is obligated to reduce carbon pollution because it’s violating its citizens’ human rights. The precedent-setting case provides a huge bump to other court battles happening around the world…" https://t.co/zaZ7Bkk1hM

The biggest fire that Australia has ever known will be encroaching on Sydney this weekend.

Humanity has often flirted with extinction in the past. Around 195,000 years ago a long glacial period (Marine Isotope Stage 6 – MIS6) wiped out most humans, leaving only a small band of perhaps several hundred people left, living in South Africa. #ClimateChange #climate

For two months, Chileans have been protesting all over the country on a daily basis. https://t.co/tomS5SstgF