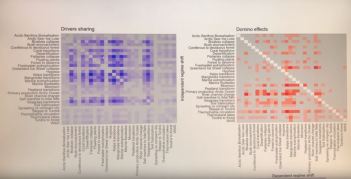 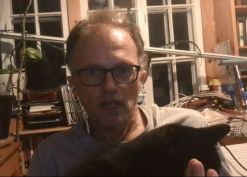 One global truth: the only constant is change. In the case of the climate system, this change is massive far-reaching abrupt change, highly nonlinear, much faster than expected, highly exponential in many cases, full of unexpected surprises, leaving no part of Earth untouched. In this video (and next) I chat on a new study that makes a stab at:

‘The potential for regime shifts and critical transitions in ecological and Earth systems, particularly in a changing climate, has received considerable attention. However, the possibility of interactions between such shifts is poorly understood. Rocha et al. used network analysis to explore whether critical transitions in ecosystems can be coupled with each other, even when far apart (see the Perspective by Scheffer and van Nes).

‘They report different types of potential cascading effects, including domino effects and hidden feedbacks, that can be prevalent in different systems. Such cascading effects can couple the dynamics of regime shifts in distant places, which suggests that the interactions between transitions should be borne in mind in future forecasts.

‘Abstract: Regime shifts are large, abrupt, and persistent critical transitions in the function and structure of ecosystems. Yet, it is unknown how these transitions will interact, whether the occurrence of one will increase the likelihood of another or simply correlate at distant places. We explored two types of cascading effects: Domino effects create one-way dependencies, whereas hidden feedbacks produce two-way interactions.

‘We compare them with the control case of driver sharing, which can induce correlations. Using 30 regime shifts described as networks, we show that 45% of regime shift pairwise combinations present at least one plausible structural interdependence. The likelihood of cascading effects depends on cross-scale interactions but differs for each type. Management of regime shifts should account for potential connections‘.
———- ———-

One global truth: the only constant is change. Second video, continues from above.
———- ———-

I do not love you. I hate you, Sarah Sanders. I can't stress this enough. https://t.co/N73aEnanuN

So many tweets going by that I can't remember who said this; but Mnuchin's intervention from the golf course yesterday was like the pilot on a regular flight coming on the PA to say,"I'd like to reassure everyone: we do have enough fuel to land."

Our New Year resolution: get rid of Capitalism, the only system in which a man gets a Nobel Prize for finding ways to make more money out of the deaths of thousands of people and wildlife.
Wonderful Xmas gift from Mr Nordhaus. #ExtinctionRebellion https://t.co/UULcKavjXM