This seemed an important recognition and acknowledgement.  Of course, I cannot share all the news here, nor should I, but I am trying to–periodically–rotate and put the best of the best here focused from my twitter, Facebook, and special friends who have some great shares, especially at Facebook. Today, I share three good articles.  One on permafrost, another on Antarctic Ice, and thirdly warmest Oceans on record, for September.

First, I am indebted to Robin Westenra, for the h/t on ‘Permafrost warming in parts of Alaska is accelerating‘, from his catholically broad and well connected SeeMoreRocksBlog. Thank you Robin.  Key sections shown below.  Click link for full article.  Text by others is, of course in usual italics:
—– 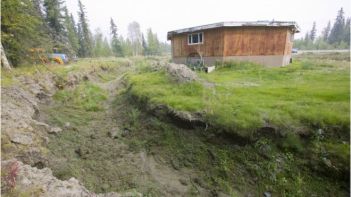 ‘One of the world’s leading
experts on permafrost has
told BBC News that the
recent rate of warming
of this frozen layer of
earth is “unbelievable”.

Prof Vladimir Romanovsky said that he expected permafrost in parts of Alaska would start to thaw by 2070.  Researchers worry that methane frozen within the permafrost will be released, exacerbating climate change.  The professor said a rise in permafrost temperatures in the past four years convinced him warming was real.

It was assumed it would be stable for this century but it seems that’s not true any more
Prof Vladimir Romanovski, University of Alaska.

Permafrost is perennially frozen soil that has been below zero degrees C for at least two years.  It’s found underneath about 25% of the northern hemisphere, mainly around the Arctic – but also in the Antarctic and Alpine regions.  …

Scientists are concerned that in a warming world, some of this permanently frozen layer will thaw out and release methane gas contained in the icy, organic material.
Methane is a powerful greenhouse gas and researchers estimate that the amount in permafrost equates to more than double the amount of carbon currently in the atmosphere.

Melting fast:  Prof Romanovsky… professor at the University of Alaska …head of the Global Terrestrial Network for Permafrost, the primary international monitoring programme. …

Permafrost:
“When we started measurements
it was -8C, but now it’s coming to
almost -2.5 on the Arctic coast.
It is unbelievable – that’s the
temperature we should have
here in central Alaska around
Fairbanks but not there,”
he told BBC News.

In Alaska, the warming of the permafrost has been linked to trees toppling, roads buckling and the development of sinkholes.  Prof Romanovsky says that the current evidence indicates that in parts of Alaska, around Prudhoe Bay on the North Slope, the permafrost will not just warm up but will thaw by about 2070-80.

“It was assumed it would be stable for this century but it seems that’s not true any more,” he told BBC News.

‘Convincing’ case:
He says the current permafrost
evidence has convinced him that
global warming is real and not
just a product of natural variation.

“Ten years ago, if you asked permafrost scientists around the globe I would say 98% would say: ‘The thawing at Prudhoe Bay won’t happen by the end of this century’,” Prof Romanovsky explained.

Prof Schuur … believes that political negotiations on a new global climate deal … set to conclude in Paris … are essential … “negotiators … won’t immediately be able to change what happens with the fire season in Alaska next year, but we can slow the process down by focussing on human emissions and in my mind that’s the best bet to have the most control.

“It’s very hard to control these landscape global processes that are occurring in the Arctic.”
———- ———- 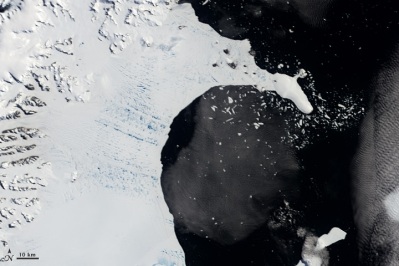 Postscript, addendum:  If we are talking about the TOP of the world, it’s only fitting we not fail to mention the bottom as well.  Both frame us.  Quite a mention:

‘Trusel and his colleagues found that if emissions continue at the current pace, Antarctica’s ice shelves would be losing around 600 gigatons of melt water per year by 2100. “That’s the equivalent of eight years of Niagara Falls running continuously,”

he says. “We’re talking about a completely different Antarctica.” At that point, the melt rate would be at or above the point where ice shelves have historically destabilized and collapsed, like the Larsen A and Larsen B shelves, which collapsed abruptly in 1995 and 2002, respectively, shocking researchers.’
———- ———-

Also in the new, today Sam Carana’s Arctic News Blog wrote about the ‘September 2015 Sea Surface’ being the ‘Warmest On Record’.  As he says:

‘Arctic sea ice increased rapidly in October 2015, after reaching its annual minimum in September … the growing sea ice extent has effectively sealed off the Arctic Ocean from the atmosphere, resulting in less evaporation and heat transfer from the ocean to the atmosphere. …

‘The Buffer Has Gone:  Thick sea ice used to extend meters below the sea surface in the Arctic, where it could consumed massive amounts of ocean heat through melting this ice into water. As such, thick sea ice acted as a buffer. Over the years, Arctic sea ice thickness has declined most dramatically. This means that the buffer that used to consume massive amounts of ocean heat carried by sea currents into the Arctic Ocean, has now largely gone’.