Posted on November 4, 2015 by paulbeckwith

First, some good news.  To have a thousand persons to a new website in its first month is usually an attainment, and my site had 900 the first day that it was announced and thus officially launched.  Glad to report, we now have had over 4,800 cumulative views in the last month we have been posting, which includes 2,120 unique visitors (to Fri_11/06/15, really just 22 days).

Due to some technicals on google and web structure, we are also now finally searchable on Google, Google Canada, Bing, and Yahoo.  Since so much has already been written or shown about me, or created and shared by me (many videos), this is not necessarily easy, and has begun to percolate.

I also am planning a series of videos, for my YouTube Channel, and have taken deliberate pause, to re-engineer myself.  Getting content and sharing content is not the issue.  The drive has been to clarify myself, and I am now ready for more.  I call this Paul 4.0.

Next Friday the 13th is my goal for the next video, with a follow up, Friday the 27th, but if its the 20th and Dec 4th, it will happen just the same.  Alert!  New videos are coming, with a new tilt.

My twitter audience continues to be very solid and ample.  Which is very satisfying and results in the ability to really get a big message out, fast, and to many.  And its not a matter of fix but improve.  GETTING a following is much different than being even more effective in reaching that group, and my resolve has been to post less and post better.  Repeat.  This is not fix but get even better.  Once you have an audience, NOT getting one, its a matter of helping them more and, in turn, better connecting with them.  Thats you.

Similarly, on my Facebook, I am trying to get my volume down from more like 100 posts per week from 200, as I have tried to at twitter and now with much success.  The power of all that access is large volume.  The trade off is, if the volume is too high, no one knows exactly what important is, since its all in a way important.  Signal to noise.  So clarifying myself there, too, with an eye to better coordinating between the two.

Webpage.  I try to put my best stuff here.  Its not perfect, but its in motion and starting to seed.  Its hard work.  The benefit is, having all of me in one place, as I clarify myself as a scientist, and engineer, a professional educator, a popularizer of easy to understand science,  distributor of cutting edge news, not to fail to mention as researcher, consumer of my own information, as an advocate, activist, entrepreneur, husband, father, friend.  And that is not all of it.  Its vast.  Like the heads of hydra, the more you do, the more there is to be done.  Increasing returns in systems theory…

Thus David Korn, Special Projects has been helping me mightily behind the scenes, and I am indebted to David Korn for his structure and vision of helping me consolidate, assemble, and integrate.  He is a real wizard.  I will have more to say about my having materially engaged him in the video after next, and now is not the time.  His rates are reasonable and approachable.  We are a great team together.  Just be aware, please, as we move forward that NONE of this is accidental or peripatetic, but strategic and concerted.

So just know, that Paul 4.0 is not random, but has a plan, and you can expect more.  And more soon.  Thank you to my readers, friends, followers, colleagues and all of you who care about our earth and, in our case, our habitat, oceans, skies, soil, climate, emissions, and society.

Here we are on election night at Catherine’s victory celebrations. It was a very memorable party! 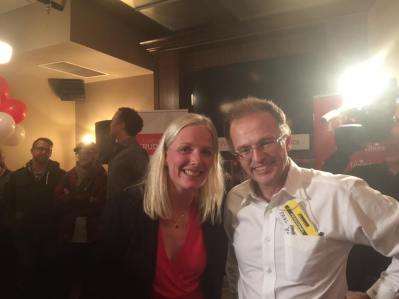